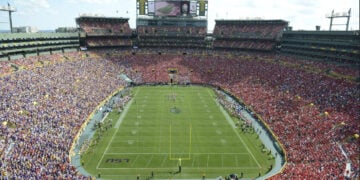 Top 5 Finest Sports Grounds in the US

Top 5 Finest Sports Grounds in the US

by William V. Schrock
in Travel
0

The United States is home to some of the finest sports teams in the world. The country is famous for housing many top leagues in different sports, including NHL, NFL, NBA, MLB, and MLS, to name a few. These leagues offer exciting competitions and a quest to win the ultimate price every year that bettors can even place wagers on them, such as the Stanley Cup odds.

One thing about US sports is that they have incredible stadiums and pitches. They spend a lot of money to build world-class sporting arenas that make the list of the best in the world. It is pretty exciting to experience the atmosphere whenever you visit these sports grounds. So, if you’re looking for spots to check out, here are five of the most acceptable sports grounds in the US.

Many NASCAR fans would claim that Daytona is the King of NASCAR racing circuits in the US. It has been around since 1947, and every race on this track was seen as the Super Bowl of NASCAR racing. William France Sr. built it, and since its inauguration, it has hosted plenty of races over the years.

Aside from hosting NASCAR races, Daytona is also home to over racing divisions. These include the Automobile Racing Club of America ARCA and the American Motorcyclist Association AMA. The circuit hosts up to seven NASCAR cup series races every year, with the Daytona 500 as the most popular one.

Every sport has that one finest stadium. For NASCAR, it’s Daytona; for Horse Racing, it’s Churchill Downs. And for NFL, it is the Lambeau Field, home of the Green Bay Packers. The stadium was named after the Hall of Famer Curly Lambeau in 1965. The stadium remains one of the most famous and revered stadiums in the league.

The stadium has seen a lot of action over the years, and it even has a famous phrase, the Lambeau Leap, coined from it. As a result, it has lived up to its hype. In the NFL season of 2007, one online SI poll gave Lambeau Field the “best fan atmosphere and game-day experience” title.

Major League Baseball is known for its competitiveness and incredible sporting grounds. There are numerous grounds to choose from, and Wrigley Field stands out after many reviews. Even though the Cubs haven’t been good for many years, the stadium still makes it high on the list of the best sporting grounds in history.

Initially, it was called the Weeghman Park, built in 1914. However, the name was later changed to Wrigley Field. The stadium has been through many emotional journeys through the years, and many Cubs fans can tell a sensational story of the Wrigley Field. Undoubtedly, there is more for the Cubs and the Wrigley Field.

This one is for the College Football fans. The Michigan Stadium is one of the largest sporting venues in the league, and it is also known as the Big House. There is a record of it housing over 112,000+ people for a game against one of the team’s biggest rivals, Ohio Buckeyes. Everyone at that game can remember how incredible the matchup was and the atmosphere.

The stadium came to life in 1927 at a whopping $950,000 expense. It has some of the best state-of-the-art facilities that make it an incredible sporting ground, and the Michigan Stadium was initially slated for a 72,000 capacity. But now, it is on the list as one of the best places to watch a football match.

Home of the New York Knicks, MSG – Madison Square Garden is one of the finest Basketball courts you can visit in the US. The venue has a history and legacy. We cannot deny that it is home to some of the best basketball moments in the US. The Garden was built in 1879 and has gone through many significant changes.

Aside from the Knicks, the courtside also houses the WNBA team, Liberty, and the Rangers’ NHL team. The venue has seen many memorable events, making it a top destination for various sports fans in the US.

It doesn’t matter your favorite sports, and if you want the best of the best, you should give the names on our list a try. You have to pick them one after the other to see for yourself. You’ll get a more incredible feel, and with fans on the ground, it can only be a better experience.